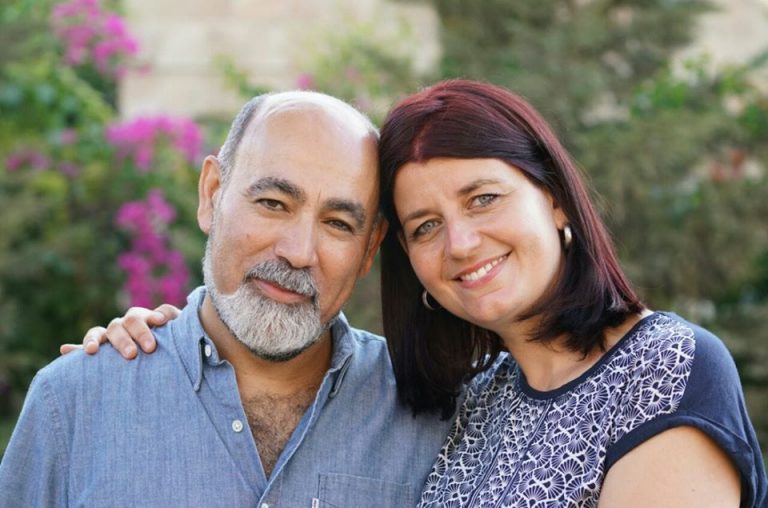 Samira and Mahmud have been married for 12 years. They have two kids, a girl and a boy. They met in Ramallah when Samira was doing research for her Master’s thesis on Libraries for Palestinian political prisoners in Israel. A friend of hers suggested that she interviewed Mahmud…

‘When we first met, Mahmud knew after one hour that he wanted to marry me. He had spent 18 years in Israeli military prisons and had been sentenced to 27 years for his political actions in Jerusalem. Coming out of prison under conditional freedom at the age of 39, he knew that he still had a chance to build a family and he had no time to waste.
I didn’t know from the beginning that we would get married, but I felt very comfortable in his presence. It was a sense of ease to be near him.
We met for the second time and had lunch together in his office. It was the month of
Ramadan and although both of us were very attached to Palestine, neither of us was fasting. It took us 10 days to decide that we want to start a family. And in three weeks we knew that we will have a child.

We didn’t talk about getting married. But when we found out that in Israel the authorities don’t recognize the father on the birth certificate if we are not married, we prepared the papers in 3 days and got married right away.
The real wedding party took place six months after the marriage. As I am not conservative at all, I didn’t want a dowery. That was another reason why Mahmud wanted to marry me. He wouldn’t be able to afford thousands of euros for the wedding. Both of us agreed to go with the traditions as far as necessary. So for the gold jewelry the bride gets on the day of her wedding, we just borrowed the gold jewelry from his sister and gave it back later.
500 guests came and celebrated with us and we think that despite we were somehow just acting under the traditions, it was a symbolically important step to do. We recommend to people to get married. It’s so much fun. Also having the same family name helped a lot for all the paper work later on as we have different nationalities. Mahmud is Palestinian from Jerusalem and I am German by mother and Palestinian from Jerusalem by father.

Why we chose each other?
Palestine is the link that keeps us very much bound to each other. Although Palestine is a traditional country, both of us are open minded. This was very important in our relationship from the beginning. For Mahmud, being with me, who is
10 years younger, was realizing a dream for a family. A dream he was imagining over the time of 18 years in prison. For me, it was to meet for the first time in my life someone who was so committed to his values, so decisive in what he wanted that I didn’t had any doubt that he was the right one for me. Someone who would even go to prison for the values of freedom and dignity.

What we are thankful for…
For Mahmud, the relationship, the family and children is so valuable and he is immensely thankful because it gives him back what he has lost during 18 years of imprisonment.
For me, the relationship gives me stability and is a source of strength. Everything in life seems so much lighter. Everything seems possible when you join forces.

A particular moment in our relationship when we felt blessed that we chose each other was when we decided to leave Palestine as a family. We moved to Bulgaria. This was
a crucial moment in our relation. From the beginning, we support each others’ career.
Mahmud did Master’s in Jerusalem and I finished my second Master’s degree in Berlin (through distance learning). Now, I work in Bulgaria and Mahmud is doing his PhD. We always try to ‘lift’ each other up. That is amazing. We decided that both cultures, German and Palestinian would be important to carry with us when we left for Bulgaria. Our children learn German and Arabic through us, we cook Palestinian food, we celebrate German Christian traditions like Advent and Christmas and share values like generosity in our thinking and in the way we act.

The children are very important in our relationship. The relationship is stronger because there is responsibility behind. Even if the children take a lot of our time and of course it’s not always easy to raise two kids, we are very happy with them. And we see ourselves in them. As both of us come from a difficult social background – I was born in East Berlin, fleeing to the West when I was 3 years old, and Mahmud was born in the old City of Jerusalem, in a poor family, we try to give our kids everything to grow happy, healthy and in prosperity.

Like other couples, we had challenges and yes, it was the 7th year of marriage that was challenging. The secret to overcome? One needs to keep the mind clear. It’s this person who needs to fight for the relationship, continuing to be optimistic, knowing in the depth of their heart that things will pass and that love may come back or actually never really vanished. It needs a lot of patience though and a lot of strength. Looking at things at their real size. We all tend to make an elephant out of a mosquito as we say in German.

When expressing love for each other, most important are not words but expressing love by doing things. Being present is one of the most important gifts you can offer. It’s just being there. Physically and mentally. To have your family in mind when shopping, to be on time when you have to take your child from school, to care when you decide what to feed the family.
The other thing is doing small gestures, like preparing breakfast for the other or the family. Bringing a gift from time to time without any occasion.

Advice we would give singles
For us it was the mutual understanding of where we want to go in life and what we want to achieve that made us see that both for us are ready, serious and committed. We shared the same values and views. It’s not so much about being crazy in love and having a firework of emotions. It’s a feeling to the other person that is much more grounded. When you have this, then just go for it. But if from the beginning you can’t count on the other, just don’t invest on something as big as founding a family.

Advice we would give couples
Forgiving the other means supporting them in their weakness. It’s helping the other
up again. It’s looking deep into the other and seeing that if they do something that
hurts us, the other person is probably not feeling very well. Asking each other questions helps more than accusations. Not putting oil into the fire is wise and is good to be reminded. Keeping calm and knowing that the storm will pass is certainly an advise to give.

The most important for us is to accept the other with his or her imperfections. Accepting that you didn’t marry a superman or a superwoman. Making compromises and being happy with what there is. Not asking for too much. Not wanting to have everything in life. To be ok and not wanting your partner to change in what you imagine the perfect person. Very often we overreact. It’s taking things
easy and being open for the moment the other opens up again to you.
My husband usually makes a joke when there is tension. That helps so much. To give it all a big loud laugh about ourselves sometimes is the best you can do.

What is your love story?

Or do you want to create it?

Write to us at rarelifecoaching@gmail.com